I met Jason Busch, fellow Enterprise Irregular, earlier this year at Sapphire. He knows the procurement space really well, and has a blog called spend matters, to which I subscribe.

I was saddened  to read that he basically wrote off the African continent from a sourcing perspective.

In my view, we would all do well to invest our tourism dollars in a continent as beautiful as Africa, not to mention our charity donations for medical care, safe drinking water and nutrition programs — among other causes — in the region. But Africa is about as far away from becoming a leading low cost supplier as it gets

This is stunningly patronising, and factually wrong.

In April 2005, General Motors awarded its South African arm a contract worth US$3-billion  to manufacture a new global version of its Hummer sports utility vehicle – the H3 – for export to markets in Europe, Asia Pacific, the Middle East and Africa. In 2004, Volkswagen SA announced a R25-billion export programme that will see the company exporting about 2 300 of its new Golf 5 cars each month through 2009, mostly to Japan and Australia, but also to New Zealand, Brunei, Singapore, Sri Lanka, Hong Kong, Indonesia and Malaysia. DaimlerChrysler confirmed that the new Mercedes-Benz C-Class would be manufactured in SA from 2007. The company plans to almost double production at its East London plant to roll out up to 80 000 units a year, a large portion of which will be exported. More here. and recently  here.

A shipment of Mercedes-Benz C-Class cars, built in South Africa by DaimlerChrysler South Africa, has headed off for the USA. The first shipment on 8 November consisted of close on 400 left-hand drive units destined for Baltimore, Jacksonville and Long Beach. It is estimated that around 225 000 cars will be shipped to this important market from the East London manufacturing plant as part of its seven-year contract to produce the model series. 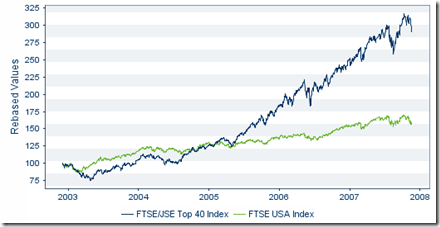 Have a look at the Johannesburg stock exchange performance vs that of the US. This is not just driven by tourist dollars, but by rapidly growing industrial and service sectors.

If you are really interested in what is going on in Africa, check out the recent TED sessions. This one on Aids, for instance.  Parts of Africa are booming, because of investment, local entrepreneurship and more stable government.  South Africa is not the only economy in Africa doing well, take Botswana….

Botswana has maintained one of the world’s highest economic growth rates since independence in 1966, though growth slowed to 4.7% in 2006. Through fiscal discipline and sound management, Botswana has transformed itself from one of the poorest countries in the world to a middle-income country with a per capita GDP of more than $11,000 in 2006.

The world’s largest Titanium mine is due to come online in Mozambique, a country until recently ravaged by war. The mozal Aluminium refinery in Mozambique is one of the lowest cost producers in the world. Expect to see more refining moving to Africa.

Corruption in Africa is not just an African challenge. You will find that many of those doing the bribing are from developed countries. And actually, South Africa ranks better than  both India and China in the bribery index.  The US is not corruption free either.

Parts of Africa offer huge sourcing opportunities, and world class service and product. It won’t just be in manufacturing either  Service Centres seem likely to do well too. This is from a recent interview with the CEO of ContactinGauteng. (Gauteng is a province in South Africa)

Gauteng is already playing a leading role in driving new growth through investment into Gauteng, and assisting South Africa to position itself as a preferred destination because of our high voice quality, relative accent neutrality, unscripted conversational ability, our warm and friendly approach, our cultural affinity and time zone compatibility with the UK and Western Europe. Recent research on UK call centres shows that 90% of calls into the UK did not question where the calls were coming from, and of the 10% who asked, over 70% reacted positively on hearing that the call was from South Africa. This is key to our competitive positioning in call centres.

South Africa hopes to be rated among the top five outsource destinations for call centres globally within the next 10 years. In view of this we are aiming to create 60% of the 100 000 jobs set as a target by the dti. This is 60 000 jobs by the end of 2009, approximately 25% direct (agents on phones and email response), and 75% indirect (team leaders, supervisors, managers in a call centre operation plus catering, cleaning, transport and related services). The growth has been phenomenal and is set to continue.

The dti’s BPO&O Government Assistance and Support (GAS) programme, launched in March 2007, has given much-needed impetus and ammunition to attract the large international companies located, for example, in the UK, to set their sights on South Africa. As a result, there has been unprecedented international interest from companies in the UK, and even the US, and there is serious investment potential in the pipeline.

Former parts of the French colonial empire are developing their call centre businesses too. Between 2001 and 2004, 55 French language call centres have been set up in Morocco, employing 6,500 people and generating total revenue of euro 85 million (US$105 million).

In the face of intensified global competition, French companies have sought ways of cutting costs by off-shoring production and outsourcing some business processes, especially client support and promotion. This is where a French-speaking former colony, like Senegal, or protectorates, like Morocco and Tunisia, come in. Some 10,000 of France’s 250,000 call center jobs have been outsourced to these Francophone countries.

This story from Senegal is worth a look. Or ACS in Ghana.  Or Rising Data, also in Ghana, KenCall in Kenya. These are small beginnings, sure, but Africa is not all broken water pumps and devastation.

That Africa will not take over China and India anytime soon in all areas of sourcing is obvious, but it is not the basket case that Jason makes it out to be.

8 thoughts on “Dismissing a whole continent?”