Sometimes with web 2.0 technologies I feel as if I’m seeing demos of solutions looking for problems in a technology bubble, but this example really shows how mashups, text messaging and blogs can have a real impact on the quality of life and democracy. In this case, in Africa.

via the TED site. Ushahidi — a crisis-tracking tool with roots in TEDGlobal 2007 — has been awarded a $200,000 grant for development from the John D. and Catherine T. MacArthur Foundation.

Spend a moment watching Erik in Action. link here if it doesn’t display in your reader.

Well done Erik and the gang.

Web 2.0 technologies are having an impact on UK politics too.

I’ve blogged a few times about education and innovation in Africa before, but I figured it would be worthwhile mentioning the AIMs School  just outside Cape Town.

The African Institute for Mathematical Sciences (AIMS) is an educational centre in Cape Town, South Africa. The goals of AIMS are:

The Institute is focussed around a nine-month, postgraduate course covering many of the most exciting areas of modern science, taught by outstanding African and international lecturers. The course develops strong mathematical and computing problem-solving skills and leads to a postgraduate diploma in the Mathematical Sciences, formally accredited by the three partner South African Universities and taught in association with the Faculty of Mathematics at the University of Cambridge, the Division of Physical Sciences at the University of Oxford, and the University of Paris-Sud 11. Students with good mathematics, science or engineering degrees are invited to apply and will be supported on bursaries where needed.

There are some videos and details over on the TED blog.   Well done Barclays for the 20 scholarships. This all grows out of 2008 TED Prize winner Neil Turok’s wish — that the TED community will help him to educate the next Einstein in Africa.  Spend some time looking at Neil Turok’s talks. Humbling stuff.

Building a grasp and love of mathematics in what will thousands of Africans is a brilliant way to invest in the long term success of the continent.

BTW.  They are looking for post docs and researchers .

Photo from the cc flickrstream of tanakawho

Via Yahoo news I read that

“Travelling across Africa and seeing the devastation caused by malaria made me realise there was more to life than putting up soccer scores,” said Hadfield.

“Everyone I met at an aid project making mosquito nets in Zambia had either lost a child to malaria or knew someone who had.”

… Hadfield co-founded the site with health professors Peter A. Singer and Abdallah S. Daar at Canada’s McLaughlin-Rotman Centre for Global Health at University Health Network as well as the University of Toronto

Malaria is a largely preventable disease, yet it kills millions of people. 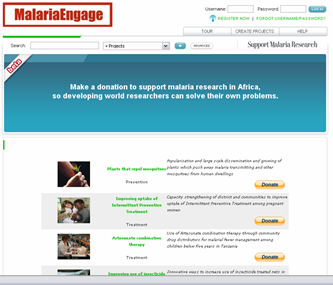 MalariaEngage impresses me for two reasons.

1. Social media platforms like this enable charities and researchers  to build compelling online presence and interaction at a price point that would have been inconceivable even a couple years ago.

“It’s about more than about giving money — it’s about creating connections. By encouraging individual participation and involvement, we will create international communities of common interest. This is the essence of social networking.”

2. By linking donations to local research, it boosts local skills and research, and explores new avenues for practical cures and preventions. Strengthening African research is goodness. Malaria impacts those least able to pay for medicine,  so it is a tragic example of market failure. The global pharma industry has not really addressed the challenge of malaria, so perhaps local research is the answer.

We feel young African scientists have very good ideas that end up in the dustbin,” said Singer. “This is about helping committed young researchers with good ideas to help themselves create a better future.”