Cross posted on my work blog.

While taking a break from a flurry of  inquiry calls about ERP upgrades vs SaaS replacements,  I ambled over to facebook with Nespresso in hand.  A few years ago I met Dave Duarte, who  introduced me to  the Ogilvy Digital Academy   in South Africa. There is a lot of innovative stuff going on in the land of my youth, so I follow the SA scene  on  Facebook and on Twitter.  South Africa has had a lot of innovative advertising over the years, and I’m pleased to see this has well and truly moved over into the social side of things.  Today’s offering really hit home powerfully.

Have a look at this video.

A couple of things stood out for me.

2. Wimpy get the fact that People with Disabilities spend money just like other demographics.   Designing solutions and marketing for that segment makes business sense.  Part of this is about equal rights and access, but it isn’t charity.  Humour works.

3. The power of the referral. See the stats at the end of the presentation.

As part of my academic research, I’m looking at how enterprise software companies approach accessibility. Wimpy puts them all to shame.  Well done Wimpy.

No, Time, thou shalt not boast that I do change:
Thy pyramids built up with newer might
To me are nothing novel, nothing strange;
They are but dressings of a former sight.
Our dates are brief, and therefore we admire
What thou dost foist upon us that is old;
And rather make them born to our desire
Than think that we before have heard them told.
Thy registers and thee I both defy,
Not wondering at the present nor the past,
For thy records and what we see doth lie,
Made more or less by thy continual haste.
This I do vow and this shall ever be;
I will be true despite thy scythe and thee.

thanks again to the sonnet a day.

photo via wikipedia. thanks!

This weekend we did some camping, just across the border into France, and very close to part of Maginot Line. Next time I visit that area I’m going to take some time and actually visit a couple of Ouvrages, go inside and see the working railway and the logistics of the thing. It is fascinating engineering and architecture, made all the more impressive by its absolute failure to deliver on its promise.

I normally dislike using military similes and metaphors in business language. It belittles the horror of war. I’m not in the trenches, in the line of fire, or going over the top, luckily. But there was something about the Maginot line that made me think about the enterprise software industry.

I suppose one could use the Maginot metaphor to describe neo-client/server architectures, but I couldn’t help thinking about software maintenance. The assumptions about maintenance made 10 years ago don’t necessarily hold today. While leaders of large software companies crow about their maintenance margins, images of the Maginot line keep coming into my head.

I’m in the middle of doing a Magic Quadrant at the moment.  It is a lot more work than I imagined, even if Jim is doing the lion’s share of it.  By the end of the process we will have had in depth presentations from nearly 30 vendors, and interviewed many of their customers. But this post isn’t about the details of employee performance management software.

Copyright is a big deal in the software industry. It is the basis on which  most software is sold or  licensed.  licence v sale is another can of worms, and not for a friday evening post.

Software IP is  considered to be a fascinating subject by a very small segment of the population, but it is the foundation upon which our industry is built.  Folks such as Geeklawyer make fortunes out figuring software IP law out.  Software companies around the world pounce aggressively on abuse of  copyright and other IP forms. This is their right, and they are pretty good at exercising it.

Celebrities also make use of copyright and other laws  to protect their image, and to earn their crust(s). When David Beckham advertises a razor, or a pair of sunglasses, the company using that image has coughed up big money for the pleasure thereof. Mr Beckham’s advisors think long and hard whether a particular product fits with his image.

Nestle paid handsomely for Mr Clooney to sip Nespresso.  And there is a mass of law, and troops of lawyers to defend Mr Beckham’s and Mr Clooney’s  rights to their images. Joe citizen has certain rights, but celebrity image rights is big business. California, home to many celebrities and software companies has strong laws to provide additional rights to celebrities.

Privacy rights extend to the celebrity status of deceased persons as well. Permission for the reproduction of photographs, movie stills, or other depictions of a deceased celebrity requires permission from the person or corporation who owns the rights to them. thanks to Fergus law office for the info .

Under UK law, the law of passing off can sometimes be used to prevent a celebrity’s image being used overtly to promote a commercial product. Have a look here at this case. more details here.  For those interested in comparative rights to one’s own image, see this paper on SSRN.

Why is it then, that so many software demos include images and data of Mr Beckham, Brad Pitt,  Cameron Diaz, James Bond and Matt Damon?

I’m not a lawyer, but it seems to me that using their names and images without their permission infringes the self same copyright laws that enable software companies to charge money for software. Never mind the more complex and messy issue of privacy and reputation.

When you demo enterprise software, don’t promote George Clooney to Deputy Vice President,  make jokes about David Beckham being on the bench because he is a bit slow or change Ms Zeta-Jones’ family dental benefit plans. Unless of course, you have permission from the said celeb.  I’ve not even started on the data protection law implications of processing their personal data…

I’m not a lawyer, so if you don’t believe me, have a chat with your in-house legal counsel. You might think it is cool to have a bunch of celebrities in your demo system, but I’m not sure that it is such a good idea.

I’m continuing the law related ramblings, but some of you will be pleased to know I’ll rest the privacy stuff for a while.

Vinnie Mirchandani is normally a vociferous supporter of all things free-market, and the arch enemy of compliance. His dislike of the  Sarbanes-Oxley Act is legendary.

I was  surprised to read his call for stronger software industry regulation. Please read his post in full, then pop back here.

I won’t go into a discussion here on whether all regulations he suggests make sense or not, I’d like to pick up on them another day.

In part, I agree with Vinnie.  It amazes me how little direct regulation our industry has. Toys, insurance, cars, hairdriers and maps  all need testing before you can buy them, but any old idiot can set up a software company and try and sell stuff.  There is stricter certification for wiring a plug or installing toilet roll holders for a living than there is for coding software.  One of my earliest posts looks at this.

As the digital world becomes more and more vital to our personalities, our jobs, friendships, thoughts, politics and  beliefs should the web and the vast databases of information about us be determined solely by short term shareholder value?

As software does more and more important stuff on our behalf, it is likely that it will face greater regulation. This may be no bad thing, but let’s tread cautiously.  Regulations, like technology, often bump into the law of unintended consequences. This can be a good thing in software, as may lead to Accidental Awesomeness. In law though, it tends to hurt folks it was supposed to protect, or protect things that ought to be protected.

I will take on one of Vinnie’s points though:

Require systems integrators to be truthful

This was amplified by Nitin’s comment about outlandish sales claims.

Another one comes to my mind as a honorable mention as well:
– Regulate the advertising or hold vendors accountable for what they claim regarding profitability and efficiency. Vendors claim the moon – I cannot see any other industry where there is so much FUD and bogus claim

Software salespeople don’t live in a vacuum, and there is very little new under the sun when it comes to contract law, advertising and sales promises. To assert that software salespeople and marketeers are somehow more devious than their peers  is a tad insulting to the ‘ingenuity’ and avariciousness  of the generations of sales people that have gone before them.

Let’s head back to Victorian England. . 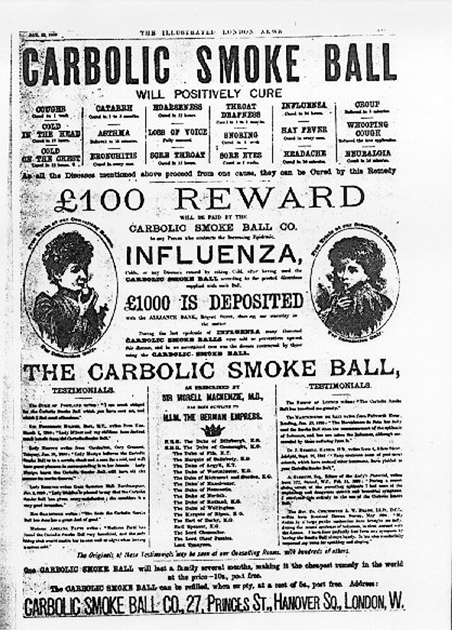 The defendants, the proprietors of a medical preparation called “The Carbolic Smoke Ball,” issued an advertisement in which they offered to pay 100 to any person who contracted the influenza after having used one of their smoke balls in a specified manner and for a specified period. The plaintiff on the faith of the advertisement bought one of the balls, and used it in the manner and for the period specified, but nevertheless contracted the influenza:-

Held, affirming the decision of Hawkins, J., that the above facts established a contract by the defendants to pay the plaintiff 100 in the event which had happened; that such contract was neither a contract by way of wagering within 8 9 Vict. c. 109, nor a policy within 14 Geo. 3, c. 48, s. 2; and that the plaintiff was entitled to recover.

One supposes that this case could be seen as an early example of vapourware.

The law to hold “hold vendors accountable” or “systems integrators to be truthful” has been in contract law well before even the venerable Geeklawyer started out in practice.

In my presales days  one of my best demo sessions was when the prospect videoed the complete presentation and workshop.

The law has been clever enough to have a proper term for outlandish sales and marketing  bullsh*t. It  calls it “mere puffery.”  The presence of  video camera does tend to reduce the desire to engage in such puffery though.

Contract law and supporting legislation has developed over literally thousands of years, and courts have been largely successful at picking up unfairness in whatever happens to being bought or sold.

In UK law for instance, the practice of limited liability in IT contracts was struck down in the St Alban’s  DC v ICL case. They were able to claim damages for the cost of incorrectly calculated taxes, which were far higher than the costs of the solution. Harry Small, one of the UK’s leading computer lawyers, wrote up the facts of the case here.

Software does create challenges for contract law, sure, as other innovations in the past have done too.  (I will return to  goods vs services  another day)

To those that argue that software and IT are a special case in contract that require unique regulation, I’d suggest that they read the classic 1996 Esterbrook Speech, Cyberspace and the Law of the Horse. Contract law has done remarkably well at protecting buyer and sellers for 1000s of years, and I’m not sure that commercial buyers of software need significantly more hand holding than the buyers of smokeballs had 120 years ago.  (Consumers do though)

I’m not a free-market zealot, but contract law is one of humankind’s most impressive creations.